African Rainbow Capital (ARC) Investments, the Patrice Motsepe-owned investment holding vehicle, is battling to convince the market of the value of its assets, its co-CEO Johan van der Merwe said on Thursday.

Almost two years since it listed, the 56% discount at which its shares trade is becoming a sticking point for the company, which owns stakes in everything from financial services and telecommunications businesses, such as TymeBank and rain, to mining and construction assets such as Kropz and Afrimat.

The company has been unable to close the gap between its traded share price and its intrinsic net asset value (INAV) per share, which is seen as the most appropriate way to assess how well an investment holding company is performing.

“If I have to be very honest, I must say that we have been singularly unsuccessful in convincing the market of the value proposition of the ARC investments,” said Van der Merwe on Thursday, after the release of results for the year ended June.

He attributed the discount to various factors including the relatively short period of the company’s listing and the need to build up a track record of at least three years to convince investors; the diversity of assets in its portfolio; and the fact that some of its key underlying assets — such as mobile data provider rain and TymeBank — were unlisted and early stage investments.

Although market analysts say there is no set range for what the gap for an investment holding company should be, Johann Rupert’s Remgro traded at a discount of about 15% in the six months to end-December.

“Sometimes it’s difficult to share all of this with the market. Most of the companies we are invested in are private companies; they don’t have to give information to the market. In fact, the information that they have and how they operate … they regard as a competitive advantage,” Van der Merwe told Business Day.

The discount nevertheless does not sit comfortably with the company. Van der Merwe said that if after four years it continued trading at these levels, then “we will have to do some serious introspection”.

But he emphasised that ARC Investments had invested in underlying businesses with a long-term view, and said its approach was more like

that for a cricket Test series than for a one-day game.

The company’s results showed its INAV had risen a modest 2.4% to reach R9.34 per share for the year. In contrast, the share traded at a vastly lower R4.09c on Thursday afternoon. The company said that the growth rate is well below the company’s long-term target of 16%, but was in line with current market performance in a tough economic climate. The company’s intrinsic investment in the ARC Fund — its primary investment vehicle — rose 2.5% to R9.7bn at year’s end.

“I don’t think the market is convinced of the [company ’ s] near-term prospects … given the difficult operating environment,” said Kabelo Tshola, portfolio manager at FNB Wealth and Investments. The fund could also benefit from a more focused approach to their core assets, said Tshola.

The extent of the discount was “slightly out of kilter” with other investment holding companies, said Tshola, but there was no hard and fast range for these types of shares to trade at. Much depended on the quality of the underlying assets and the

56% the discount ARC’s share price trades at, which is becoming a sticking point for the company

investment track record of the management team. “But the discount should narrow as the market becomes more convinced of the numbers on the banking side.” A slightly more buoyant economy would also help most of the underlying investments, he said.

Overall, the results were satisfactory, given the subdued trading environment experienced, Tshola said.

The group took a significant “bloody nose”, as fellow CEO Johan van Zyl put it, in its mining, energy and construction division, driven predominantly by difficulties experienced at Kropz Elandsfontein, its phosphate mine and processing plant on the West Coast.

This formed the bulk of its fair-value write-downs which totalled R1.014bn. These included write-downs of about R239m in Bluespec, a motor repair and recovery business.

The write-downs were balanced by improved valuations in a number of its digital and banking businesses, such as TymeBank, rain and Fledge Capital, which holds car sales platform WeBuyCars. Together, TymeBank and rain saw writeups of R640m.

TymeBank and rain were both meeting their milestones.

According to Van Zyl, on Wednesday the bank had seen 740,000 accounts opened, and was on track to reach a million by year’s end. 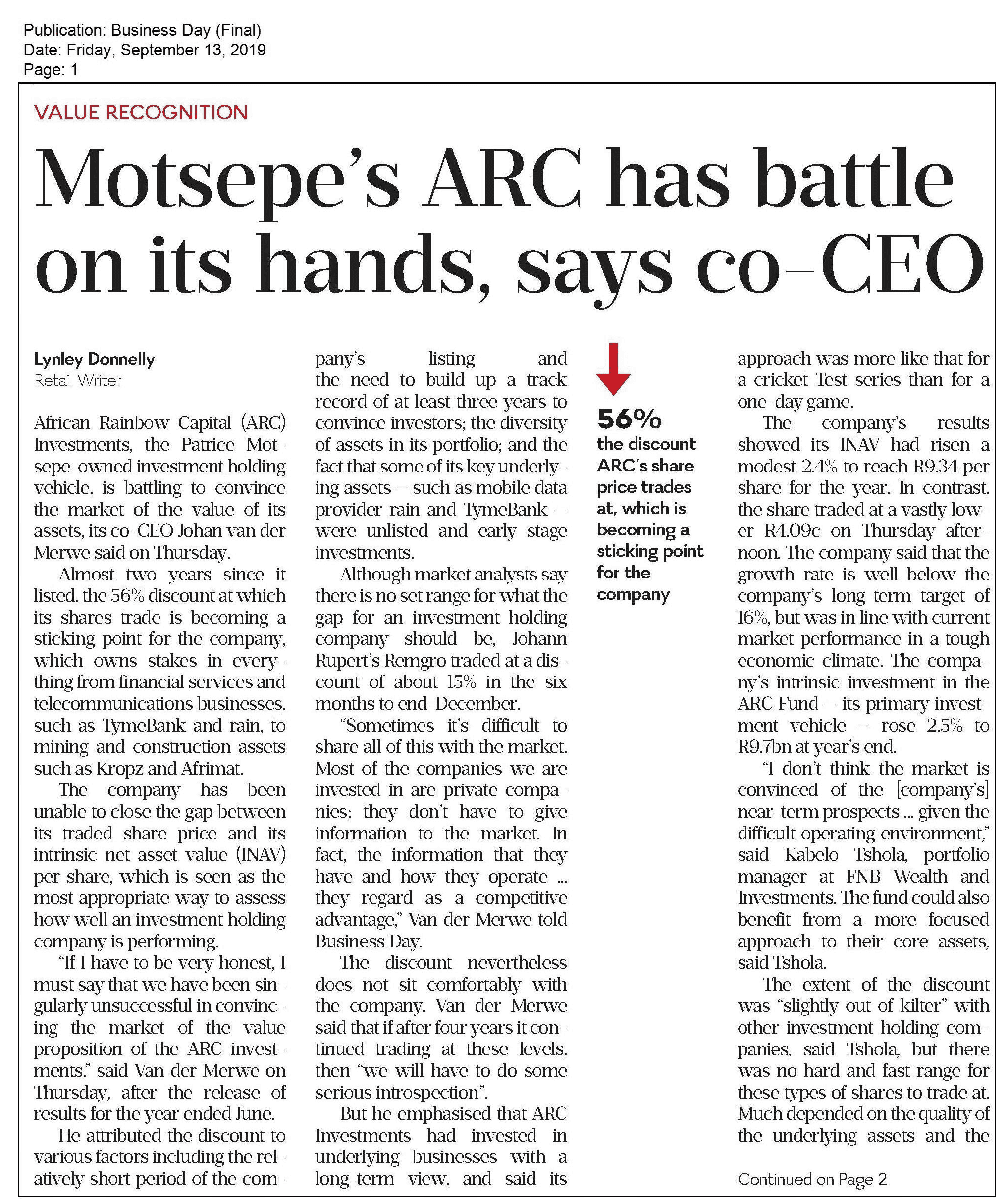 How Sanlam won the crown