African Rainbow Capital has sparked outrage over its R750m rights issue — part of which will go towards paying a management fee. Some analysts are especially livid, and we asked CO-CEO Johan van der Merwe why the company would issue shares at all, given that the market price is way below the company’s ostensible NAV.

Jvdm : We don’t set the share price; we can only determine what we buy and how we manage our portfolio, and [from that] we come out with what we believe the NAV is.

I don’t know whether people think we just suck those values out of our thumbs and that no-one checks … The values are interrogated; they’re audited.

You can imagine the auditors these days, how sensitive they are about being right. They go through a very rigorous process; they also put a marketability discount [on the assets], a minority discount, and then we come out with the NAV. For the market to say we’re trying to manipulate our NAV to get bigger management fees is unfortunate, because basically what people are saying is that we’re crooks. And then they’re saying the auditors are also crooks. It is totally ridiculous.

The economy and the market is going through a very difficult time. There are lots of opportunities in the market and we don’t want to be caught short of cash. We’re doing a rights issue of R750m on a NAV of R10bn — it’s only 7.5% of the company.

Are you saying then that it’s more important to have cash, to make fresh investments, than to try to narrow the discount between the share price and the NAV by, say, buying back your shares?

Jvdm : At the moment, we believe it’s very important to have cash. There are opportunities, but also existing [investments] where perhaps they need cash. Earlier in the year, rain had a rights issue and we had to decide whether to follow or dilute. We didn’t want to dilute [our holding]. There were businesses going through lockdown that have really struggled, and here and there we also had to provide bridging finance.

Also, because we’re an investment company, we buy and sell investments. We were busy with a couple of transactions, some unsolicited bids, when Covid struck, and those just closed down. One of our investments would have brought in about R250m, but lockdown was announced and the parent company just said: “No money out of the front door.”

Now that SA is opening up again, are the deals that were iced back on the table? Or have they permanently vanished?

Jvdm : My view is that they won’t just disappear. It’s a bit of a mixed bag out there and I think people just want a little more certainty, but I think that certainty will come back.

How much is the management fee?

Jvdm : The fee is something that was there from day one. Maybe some people didn’t like it, but if they didn’t they shouldn’t have bought shares.

Remember that we, as an empowerment company, can’t sell — at least from Patrice [Motsepe’s] side, because he has to keep the credentials and has to be compensated for that. We’ve also got a team of about 20 people — we rent premises, we travel, we work — who have to be paid. That is what the fee is there for. It is payable on a quarterly basis and we decided we would only take the cash on a six-month basis. After the first six months, we were busy with these other transactions that were cancelled, as I mentioned, and we decided not to pay the management fee because we [didn’t] want to run into a cash crunch somewhere.

The fee is more or less R40m-r45m a quarter. There are four quarters of fees lying there, which is about R180m.

Is that every year?

But therein lies the issue: the fee is based on NAV but the shares are issued at market value, and there’s a big disconnect.

Jvdm . It was from day one based on NAV. We don’t make huge profits on this fee; the real money we can make is if we outperform the benchmarks. In the first year we earned a performance fee, and that was not paid in cash but in shares. 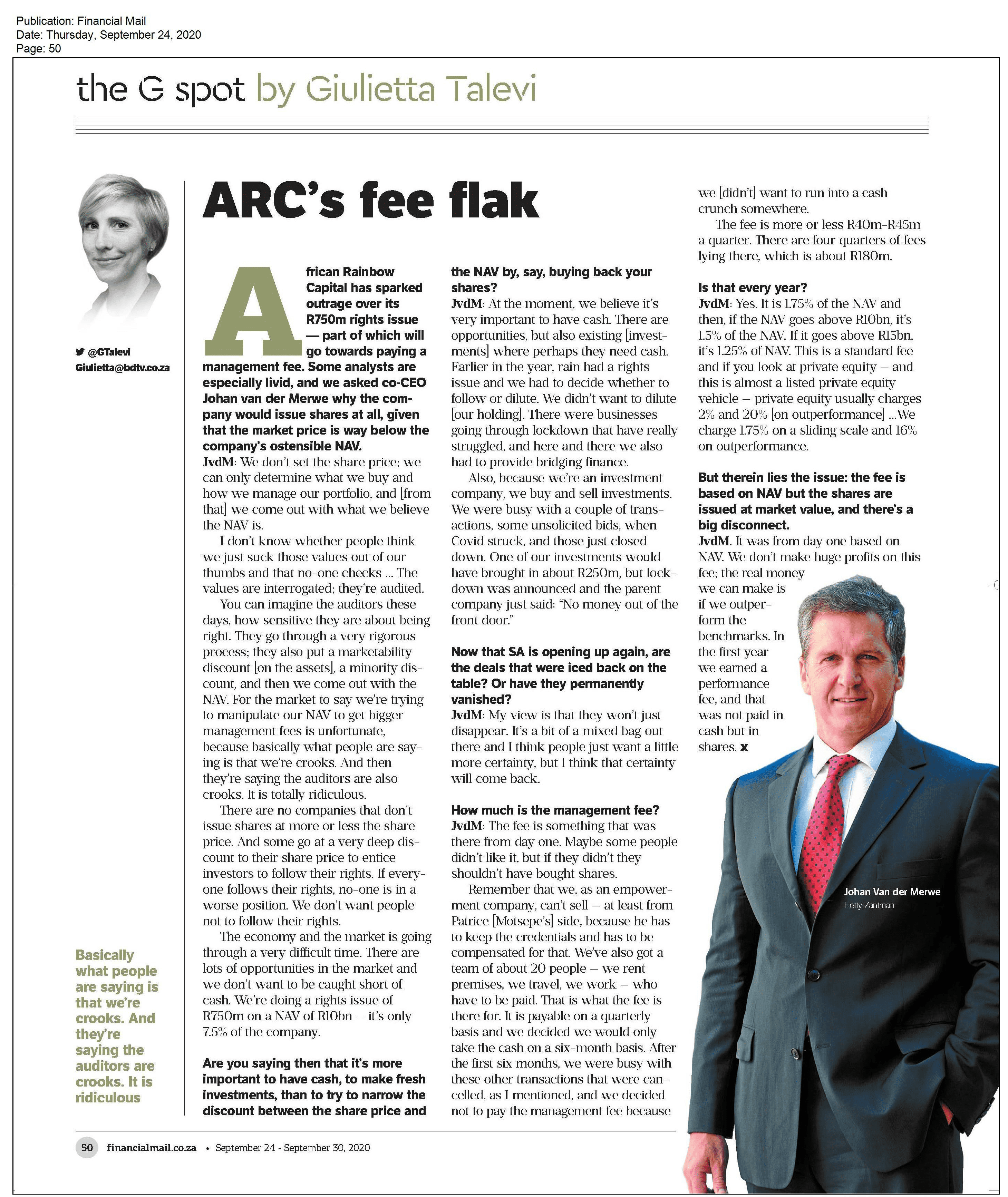 By JANE STEINACKER In March this year, TymeBank was about to launch a credit facility…