The investment group listed in September 2017 with an asset portfolio of R4.47bn. Since then, through acquisitions, it managed to grow its portfolio to R8.14bn by June. When cash and other assets are included, the company’s intrinsic net asset value rose 9.1% to R9.5bn since listing.
Motsepe and his management team have invested in companies such as telecoms group Rain, new stock exchange A2X, Alexander Forbes, and Santam. In the nine months under review, they spent R3bn on increasing their interests in existing investments.

“People say [our] investments are too wide, we seem to be buying anything we can make money out of. But there is actually a method in our madness. We are buying businesses to stay in them forever.
“But most importantly, we facilitate access to investments that would have otherwise been difficult to access,” said co-CEO Johan van der Merwe, listing Rain and A2X as examples.

After the end of its financial year, ARC made further acquisitions. It bought a 30% stake in Rand Mutual Assurance, a company that adjudicates and administers workers’ compensation claims. It will take part in the new Sanlam BEE deal that will see the insurer increase the stake of its empowerment partners from the current 5% to 19%.

ARC is also in negotiations to buy 100% of digital bank TymeDigital, which is the only direct competition to Michael Jordaan’s Bank Zero.

Van Zyl said they were in talks and he hopes they will have something to report to the market in a month’s time.

ARC’s “diversified” investments portfolio makes up 75% of the group’s portfolio and its interests in financial services account for 25%. Most of these investments have shown good growth in just nine months. For instance, Rain’s fair value increased by R366m. But ARC has also been hurt by some of its investments. It bought into EOH, which has seen its fair value decline by R236m.

ARC sold some businesses in the process. Agriculture firm BKB was the first to fall and it was sold for more than double the price ARC had paid for it less than two years ago.

Van der Merwe defended ARC’s decision saying that while the group will inevitably sell some of its investments where it makes sense, it is not in the business of buying businesses today to sell tomorrow. He said ARC was a “permanent capital company” that locked itself into investments for a long period.

Independent equity analyst Maurice Conradie said ARC had done well for a newly listed company and the results reflected the strength of its management team.

“They took a knock on EOH otherwise they would have had 17% growth. They really have a competitive advantage with their empowerment partner proposition and they are doing something new,” said Conradie. 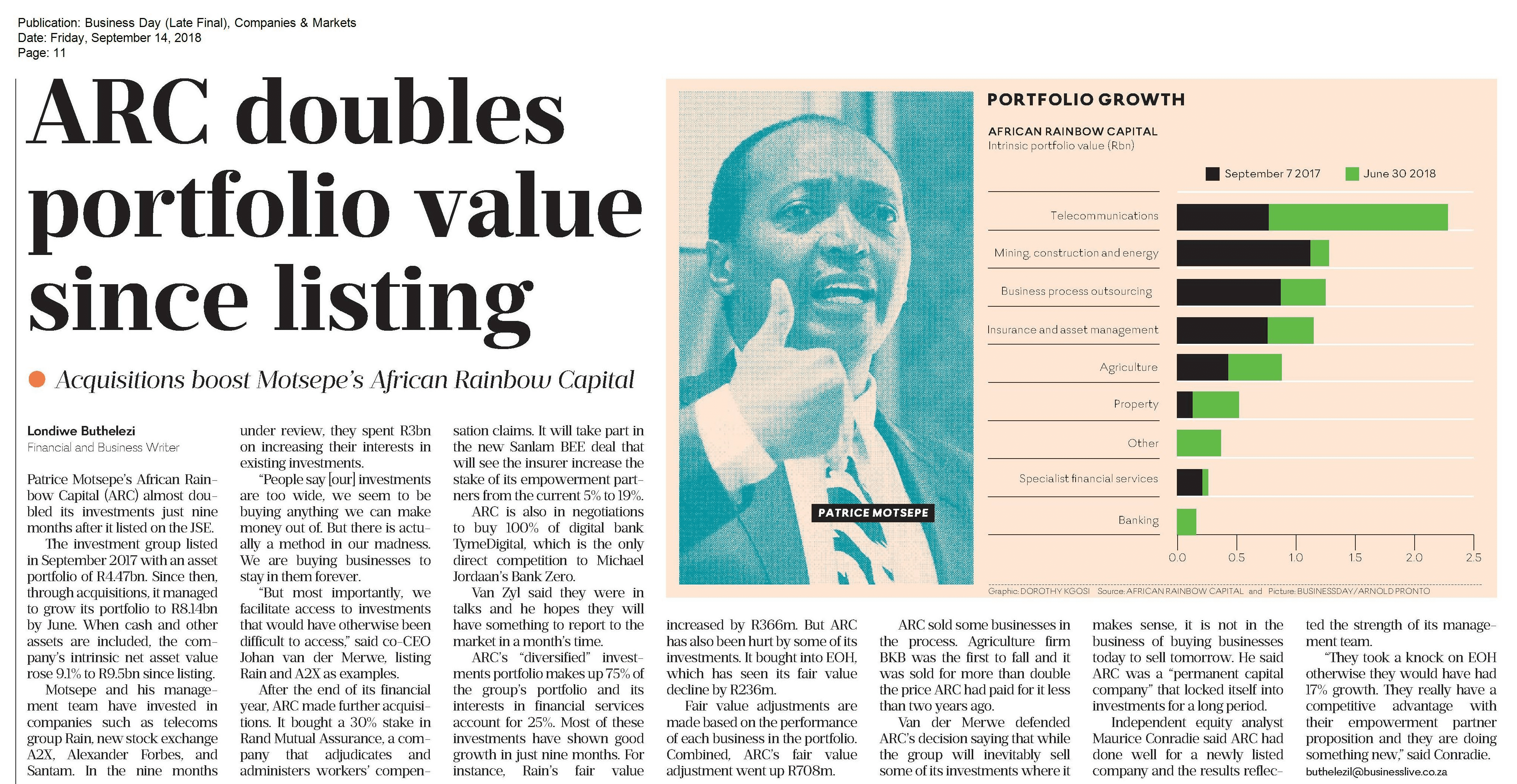